The origin of 4 Wieler

The history of the 4Wieler

The most fun and only really safe bike that you can’t fall with.

Funnily enough, the history of 4wieler starts with a tricycle: the Feetz. This dynamic means of transport with 2 wheels at the front and 1 wheel at the back, developed in 2005, was designed by Lennart Vissers for his graduation from the Design Academy in Eindhoven.

It has already won several awards, including the prestigious Dyson Sustainable Design Award and the audience award during the Graduation Show of the Design Academy, both during the Dutch Design Week in Eindhoven. After these successes, Lennart and his father Herbert Vissers decided to take the Feetz into production in 2006.

Soon there were also many questions to make a stable adult tricycle or disabled bicycle in addition to the dynamic tricycle Feetz. But with three wheels it turned out not to be possible to make a sufficiently stable and safe bicycle that really helps people with stability problems.

This is how the SupportBike was created with four wheels. So narrow that the bike fits through any door. But much more stable than tricycles for adults. 4Wieler was finally created at the beginning of 2010, after the splitting of the dynamic tricycle Feetz and the stable four-wheeler SupportFeetz.

After the split, the SupportFiets continued under the banner of 4wieler to provide tailor-made solutions to customers with the same care, passion and enthusiasm if necessary. 4Wieler attaches great importance to personal contact with customers and we are happy to visit you without obligation to introduce you to the 4Wieler of your choice and to try out the bicycle in your own familiar environment.

"The stable 4Wieler is the solution for me"

“The clear folder has been thoroughly researched. Mr. de Bruin can't wait for the custom made 4Wieler to be delivered. "I am still reasonably healthy, but there is always wind and my balance is deteriorating. There are narrow polder roads with larger vehicles than before. I no longer feel comfortable with this. The stable 4Wieler is the solution for me. different, but it comes almost naturally, I really advise everyone to transfer early if you are afraid of falling. ”

"I can't fall anymore and I'm very happy about that"

Recently Mrs Rovers (93) can be seen cycling again in Uden. A miracle, written off by everything and everyone because of her back and rheumatism, you can watch her 'rush' by on a duo bike, enjoying and chatting. "I really am there, just write it in large letters, very happy about that. The movement, the stability, the ease and the ultimate feeling that the fear of falling has disappeared. I am very surprised that I have not yet found another four-wheelers pass by."

"A safe bike ride to Utrecht is possible again"

Until recently, Mrs. Willemsen with a spinal cord injury could no longer experience the environment moving. "I want to cycle for the rest of my life. Talking will come naturally. I have to and want to keep moving. Sitting still is not for me. The fear of falling in a tricycle remained. It didn't feel completely stable. That's why I "I kept looking for something that is more stable. And then luckily I ended up at 4Wieler in Leiden. A safe and familiar bike ride to Utrecht is possible again. I'm feeling the weather and it's no longer a problem."

Write a review too →

In 2011, the 4Wieler DuoFiets was designed and put into production. On a 4Wieler DuoFiets, the driver and passenger sit comfortably next to each other, the driver on the left operates the bicycle and watches the traffic. The passenger next to it can choose its own gear and can pedal along, but that is not necessary. Nice and healthy exercise in the open air is the motto of 4Wieler and that in a position just like on a normal bicycle: on a saddle and pedaling down. If the co-driver needs more support, a backrest with armrests can be mounted behind the saddle. For the feet, there are also balance pedals with foot straps. And for the passenger who can no longer cycle, there is a seat or chair and a footrest instead of the saddle. The Duofiets also steers and rides very lightly and if both riders can cycle then pedal assistance is not immediately necessary. At the beginning or at any time later, the Duofiets can be equipped with electric pedal assistance. Like all 4-wheelers, the Duofiets also distinguishes itself with its well-thought-out technical solution and the unique spring-loaded front wheel suspension in combination with a beautiful, modern design. A duo bike is multifunctional: baskets, boxes, bins and suitcases made of reed, wood, aluminum and leather can be mounted on the front and/or back. Also child seats and benches and cargo trays by the way. 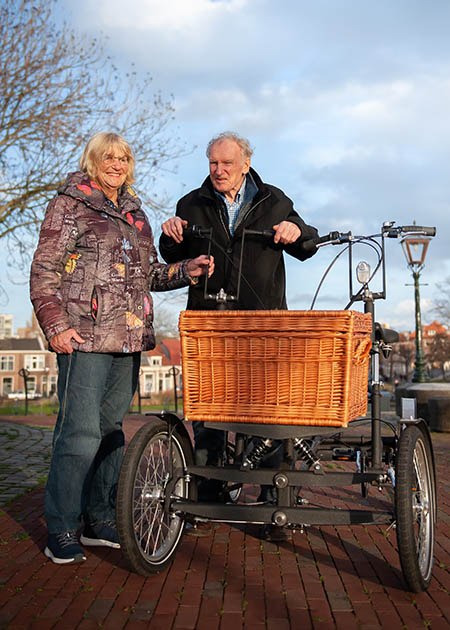 From the Duofiets to more 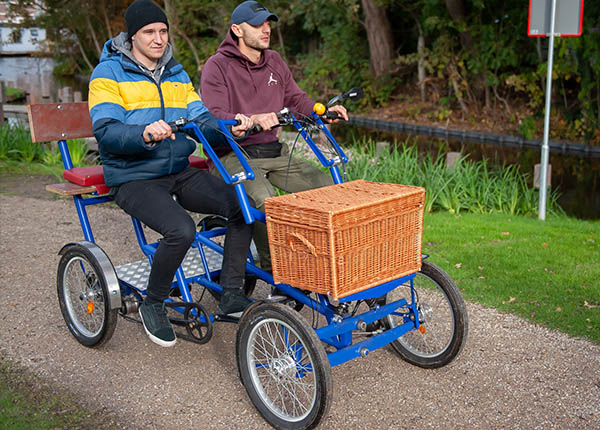 Then the Duofiets can be transformed into a Duo-Picnic-Fun bike, a Duo-Sportive Senior Bike, a 7-person Family Holiday bike, a Duo-Meeting Bike (for 2 or 4 people) or a Duo-Vrachtfiets in just a few steps. There are plenty of ideas for the coming years to develop new products that contribute to healthy and pleasant mobility for everyone up to old age. Below are two images of the 4Wieler 3 wheel tilt bike: the sporty alternative to a cargo bike. This will be available soon.

A 4Wieler can view and test you at 4Wieler in the Innovation and Expertise center in Leiden. There you will receive the essential information about the unique characteristics of the bicycle and what they have as an advantage for you. Your safety comes first, which is why a test drive is mandatory and 4Wielers are not for sale through dealers. If traveling to Leiden is not an option for you, we can make an appointment at your home.
Make an appointment →

“Making a test drive is mandatory and free in Leiden. Together we will examine and decide whether you can safely enter traffic by bicycle.”

Contact us for a free test drive and experience it for yourself!